Without a Song, The Day would Never End: Elvis Aaron Presley
When World War II finally ended in 1945, Elvis Aaron Presley was 10 years old. This shy musical prodigy won a singing contest at the Mississippi-Alabama Fair. His prize? Five dollars and free tickets to the rides. Elvis was considered to be a well-mannered, quiet boy who was close to his mother. Music was his consuming passion before he was a teenager. His religious faith was also a defining and enduring influence.

Although many people were still living close to the last military base where they were posted during the war, many were looking forward to establishing new lives after the war ended. Soldiers and their families were poor; it was a time when 5 cents bought a bag of chips, 10 cents a bottle of soda pop.

People dealing with the losses of family and friends often turned to music for healing. There was an air of excitement as people rebuilt their lives by sharing work, music, and fun together. Church healed the wounds of losses and gave us strength. I still clearly recall the sounds of the pipe organ and choir.

My brother and I, who were young at the time, experienced both the transition into post-war life and the evolution of new music. I looked forward to Saturday nights when my parents, dressed to the nines, would attend the married couple’s club and dance to the music of Jimmy Dorsey and his band.

We encountered Elvis Presley’s music as teenagers. From that time on, music would never be the same as Elvis ushered in a whole new era of American music and popular culture.

“….it was like he came along and whispered some dream in everybody’s ear and somehow we all dreamed it.”
Bruce Springsteen

“Before Elvis there was nothing.”
John Lennon

The one element that truly defines a musical prodigy is the ability to create a performance so dynamic that it captivates and at times even overwhelms the audience. Elvis captivated audiences. The stage was his world and he adored his audience. Elvis did not express himself the way other singers did. Instinctually, Elvis expressed his passionate spirit by how he held the microphone and moved his hips. He could say more in a single performance than one could say in an entire book. His instincts were his essence as a performer and that was his genius.

“He was ahead of his time because he had such deep feelings. He had the privilege of deep feelings because he was loved by his mother. He was able to appreciate profound beauty in sounds. They say all revolutions start from love.”
Imelda Marcos

Even though we live in a new time, David Archuleta’s entrance into pop music comes at a time similar to the time Elvis made his entrance. We live marked by social and political changes because of the Iraq War and September 11.

David was twelve years old when he won the junior Star Search competition. David has been called “The Voice” because he has a vocal range of three octaves (for Elvis actually 21/2 octaves). The clarity in David’s voice enraptures your heart and soothes your soul. Like Elvis, David is close to his mother and religion plays an important role in his life. His faith leads him to support charities, showing compassion wherever needed. Elvis was also on a mission and tried to improve the lives of the unfortunate. After singing “Imagine” on American Idol last year, David gained many new fans who are following him on his musical journey.

More recently, other musicians are expressing respect for David as a person and artist.

Choose for yourselves which artist I am speaking about:
“…a style and panache that has come close to pure magic, the sweat trickling down his face, he moves with the precision of an athlete, the grace of a dancer… he works with the instincts of a genius to give poetry to the basic performance …he has a tremendous effect on an audience…”

“He gets even more mature as he gets older. His range is amazing. He can sing anything. He has the ability to make everyone in the audience think that he is singing directly to them. He has a way with communication that is totally unique.”

These words were spoken about Elvis many years ago, but clearly they describe David as we know him, even in the early years of his singing career. 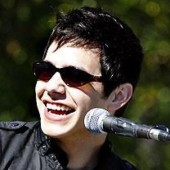