Rascal’s “Being Balladeer” post got me thinking about a lot of things, such as: What is a ballad? Who are today’s male balladeers? Has the definition of the ballad changed over time?  Will the ballad ever make a return to popular culture? I set out to do some research and found lots of information about classic ballads. Then I tried searching “male balladeers 2009” and, guess what? Almost nothing.

“Who says real men don’t whimper? Right now, wounded males rule America’s radio waves. Four of the biggest breakout songs of the season are big, weepy ballads crooned by mewling men. The trend began with James Blunt’s blubbery ‘Beautiful’ (which hit No. 1 on Billboard‘s Hot 100 song list in March), followed by Daniel Powter’s bruising ‘Bad Day’ (which got to No. 1 in April), Nick Lachey’s ‘What’s Left of Me’ (which last week peaked at No. 6) and, now, The Fray’s ‘Over My Head’ (which this week cracked the Top 10).”


These are considered ballads. Interesting. Do we agree?

And how would you define a ballad and a balladeer? The subject also got me wondering about what do listeners value more, lyrics or vocals, and whether a ballad prompts consumers to open their wallets to buy a CD or concert ticket more than an up-tempo song?

Here is Wikipedia’s definition of a ballad:

In the second half of the twentieth century the term ballad took on the meaning of a popular or jazz song especially of a romantic or sentimental nature, and was often contrasted with up-tempo pop songs.[32] From the 1970s the power ballad was developed by rock bands as an emotional song, generally focused on love, delivered with powerful vocals and using rock instruments, particularly electric guitars and drums. Examples include Heart’s ‘What about love’ (1985).[33]”

Link to the best Ballads of All Time (according to the author) http://digitaldreamdoor.nutsie.com/pages/best_balladsddd.html

Notice the age of these songs. This was back in the day, folks. Back when singing talent actually mattered, when there was no autotune. I am no musical historian, and I am not equipped to write a full-blown essay on how and when the music industry changed but it’s clear that something has changed.

Although I give props to The Fray for being listed in that article above, I’m having trouble separating lyrics from vocal talent. And “Beautiful,” though the song is very nice, for me, the vocals are weak – sorry James. I’m happy that that type of song was popular and received airplay. And the lyrics are clever, mature, the music catchy, even edgy, and yet it still did not move me. I won’t change the channel if it’s on the radio, but I didn’t buy it.  Same with “Bad Day” – clever, smart, bouncy. Daniel’s voice is nice.

I think that what bothers me about the attention these songs got is that it could be anyone singing them. The vocals are average and sound similar to many other artists. There is nothing wrong with that, and clearly these people are talented.

The Fray, on the other hand, sounds different. At least to my ears. I know it’s The Fray. Does that mean all their songs sound the same? Some people would say yes. Kinda like Colbie Caillat – many of her songs sound very much alike, but when she sings, I feel something. Why do I feel something? I cannot explain that.  Some people are moved the same way by James or Daniel.

When the old balladeers were on the scene, you knew who was singing from note one.  I’d love to see a return to the value of real talent.. George Michael, for example, and how many of his hits were ballads? A lot. Would David not SLAY, FRY, STIR-FRY, then KILL “Careless Whisper” or “Praying for Time” or “Jesus to a Child”??? What I would give to hear this on the radio again instead of talk of someone’s disco stick…..

So it is with David. Does he soar vocally and emotionally when singing a ballad? Absolutely. Is David so much better than the material that his label has promoted? Yes. “Somebody Out There” is a prime example. It is a missed opportunity. It is just as clever, smart, edgy and vocally brilliant as 10 “Bad Days” or “Beautifuls,” in my opinion.

I have no music industry experience, and I know very little about what people want anymore (well maybe some Birthday Sex??) but it seems to me that David knows what he does best, he just needs the time, money, and trust of his label/management in order to make that happen.  Guess what Davey Gravy? I’m not going anywhere… 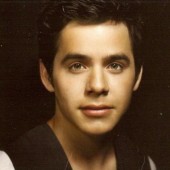