I felt like the Postal Service. Even a nor’easter blizzard that lived up to its hype could not keep DJ and me from mushing up to MA and getting on line at 2pm. There were 25 hardy souls ahead of us, some arriving at 9 am. The bus (amazingly they are ALL in one coach) and trailer was parked across from us and we watched the crew and Lesley’s band struggle in with their equipment. Kendra, Mike, Eli and Alex would periodically come by and assure us we were crazy. Ray, the adorable tour manager, asked those going to Buffalo to wait til 3 pm to line up per David’s request. DJ and I were impressed to see the handicapped were helped into the building early and given a spot near the soundboard that was elevated.

Inside, we were parked in front of David’s mike and his keyboard. It was a warm, young, loving crowd lustily singing “Crush” before he came on. Once he bounces onto the stage with the megawatt smile you are carried away for his long set of perfectly performed songs. He chats, he jives and jumps, he looks perfect and he works the stage like the pro he’s become. Each song was sung with confidence and perfect tone and on occasion as if he was transported and it drew you into a magical place.

The band is the perfect foil and support for him. Once while he was remarking about the weather he broke into a song snippet, as we all know he loves to do, and the band cracked up. They cheer him on and when you talk to them (and they love to do photos and chats after the show) they all say how thrilled they are with his growth and being a part of this magical tour. We were able to spend time with Ray, Alex and Mike and we talked about their lives too and the excitement ahead with the UK and Asia. I went to shake Jeff’s hand as he was still occupied with those with special needs. He’s quite remarkable too and I don’t want to ever hear any negatives about this patient, caring father.

In looking at my photos I see that I really didn’t capture all that I hoped to, but there is one of him singing to me that will be my wallpaper forever. During Angels he looked at me and I tapped two fingers on my heart and he smiled. He knows how much we love him and that’s all that matters to me. DJ and I expect we will never be this close again and this has been a privilege… ‘just to be with you.’”

Angel at the Keyboard 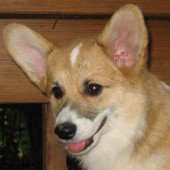 Our Fan Relationships – Part One