The Hammersmith Apollo is a venue with prestige. Literally, everyone has played there and David gets to join those ranks. London’s premier theater venue was the stage for David’s biggest show in the U.K. in front of over 5,000 people, a show that I was fortunate enough to witness, even if it was only 30 minutes long.

To be able to have David in my own country performing at that sort of venue is a blessing and a suitable measure of just how far he has come in 15 months. Long-term music careers are not built overnight and David is making certain headway with his. The future sounds ever more exciting.

I envied the McFly fans in a way. I sat there listening to David, having heard his voice almost every day for 15 months. I am fortunate to have heard him live once before. For so many of these people, it was their first time to witness what we all so love. Sitting there in this audience I realized just how infectious it is, how captivating he is. I have been to many, many gigs, some with great support acts, some with some terrible ones. But never have I seen such a warm reaction to an opening act. Cameras were everywhere, people were bouncing, swaying and even singing along in Angels.

Control from start to finish

“He’s too good to be an opening act,” said one group of girls who stood behind me at the show. I couldn’t agree more. David literally has the audience from the word go. As a support act, that is no easy task. I can honestly say I’ve only ever seen one band come close, once before.

Maintaining interest and energy levels with an audience that is unfamiliar with your music, and with you as an artist and a person, is difficult. David had control from start to finish and you could sense that people were being taken in.

I am always baffled as to how certain critics can claim David has no personality yet. All I see is someone who captures the audience with that personality, that aura, with that tenderness, warmth, energy and expression. For some, it may not be the personality they want to see on TV, but when you witness it in person, it is undeniable.

David doesn’t just love music, he lives and breathes it. Any person who has followed David for some time knows of David’s passion and enthusiasm for music. They’ve heard him randomly spacing out, singing word-triggered melodies. They’ve heard stories of him reading Billboard books. He’s also been called a “human jukebox” by Mike Krompass, the guitarist in his band.

The difference between now and when I last saw David back in September, is that he has improved the channeling of that musical passion into his performances. David commented in his latest blog that he is trying to lose himself more in his performances and the improvement is noticeable, with fantastic results. He moves around the stage now with more freedom and energy than he ever did before and no longer seems inhibited or self-aware. A performer like that is so much easier to enjoy, especially if you are new to them.

Zero Gravity encapsulates this improvement. Here David has found a song that he can lose himself in, and the energy and enthusiasm he brings is simply infectious and exciting. In both the Croydon show and Hammersmith, the whole room was bouncing by the final chorus.

However, no song that David sings tops Angels for passion. David has this ability to get under my skin and tear me up. Despite my best efforts, yes, I cried. The unexpected twists and turns that David brought to this song electrified the crowd, especially to a crowd of people who knew the song inside out. This was the song in the set that really demonstrated David as the prodigious vocalist he is. The runs combined with a voice that sang with vigor and passion. As Tom from McFly describes it, his voice is “magical.” It really is.

I was fortunate enough to be able to spend a short period of time with him amongst other people after the Hammersmith show. It really struck me just how unaffected he is by fame. He really is just David. He ascends into this performing mode, but then comes straight back down to earth. Despite almost taking my eye out with one of the posters (I’ll forgive him though) he is just an amazingly kind, genuine and gentle human being. He spent more time with us than we ever could have wanted, and listened with such interest when it would have been so easy to just be uninterested and aloof.

Seeing David is addictive. I have been to two out of my three planned shows now and have not once seen McFly. But I still want to go to more, even though he only sings for 30 minutes at a time.

David encapsulates everything I love about music. Every time I hear him perform live, my love of music is reborn. Not only do I appreciate him more, my level of appreciation for all music heightens. I fall in love with his music and his voice all over again and I remember just what drew me to music throughout my entire life. I love that feeling of peace and emotion, and the sensual touches he brings to his songs.

He unites people who would possibly never have crossed paths otherwise, pulling people from all corners of the country and planet, all to share that gift that he brings to the stage. I don’t think he can ever comprehend the impact he has had on so many lives and the joy he brings to so many.

chenson and friends in London

The spirit and aura he brings of warmth, kindness and fun is invigorating. Being able to capture and emote that special feeling, and tell a story through music, is priceless. I have spent so much time and money on David. When I think about it, it’s pretty outrageous, but honestly, as someone who loves music, I could not think of a better way to spend it. Being able to share that gift with him on stage and then be around such a genuine and normal human being after, makes it that little bit extra special. That special spirit has begun to touch many more lives in the U.K.

Editor’s note: This is how chenson describes himself on his blog: “I’m a teenage male music student from the UK with an enormous passion for music.” Visit his blog Always Archuleta for more pictures and more UK tour news. 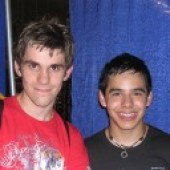