The ArchuDictionary – A Work in Progress!

It’s way past time to compile the unauthorized, unabridged and unadorned ArchuDictionary. It’s been a long time coming and since we’re already talking the talk let’s see if we can walk the walk to give the words the recognition they deserve. I picked up some of them from TDC posts, found a few others here and there and mixed them up with a couple of my own.

Archudomination – noun – a movement that is taking over the world, in which one by one, people drop like flies and become fans of David Archuleta.

2. being under David Archuleta’s spell.

Archugaze/Archuglimmer – noun – You know the look. David should patent it! It’s all in the way he fixes his eyes in a steady intent, with eagerness or studious attention, often penetrating in nature.

Archugazelle runs – noun –  the run David does across the stage that mimics a gazelle, mostly seen during Zero Gravity and Crush.

Archugroupie – noun – a fan of The Voice, who attends many shows, and usually follows him around from show to show on concert tours.

Archuholic – noun – someone who is shamelessly addicted to The Voice.

Archuland/ArchuUniverse – noun – the world, slowly being dominated by The Voice.

Archumadness – noun – the frenzied behavior on the part of fans of The Voice, before, during, and after his performances, most commonly manifested in  screams of ecstasy, jumping for joy and shouts of ‘I love you, David!”

Archushimmy – noun – a particular kind of shoulder shake David does when he dances, hard to describe on paper. You have to be there.

Archusmacked – adjective – the way you feel when you are so blown away by David’s performance that you feel like you have been smacked upside the head, as in “What just happened?”

Archusmile – noun – David’s dazzling smile that, with one look, can cure any bad mood.

Archustrut – noun – the way David walks across the stage, with a proud gait, during Zero Gravity, for example.

Archustupor – noun – a condition which usually comes on after seeing David Archuleta in concert, whereby the senses are greatly dulled, similar to a drunken stupor, only better.

How many words can you add to “The ArchuDictionary”? 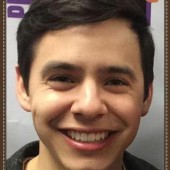 Always Something There to Remind Me of @DavidArchie