Have you ever wondered, as I have, what goes on in the mind of this musical artist we have all come to respect for his talent as well as his very nature?

In a radio interview, the deejays invited David to play a word association game. I found it amazing how his answers were so off-the-cuff that David had the deejays baffled. One of them commented on how interesting it was to see how David’s mind works. It seems that his thought process is a little different from most of ours.

As one of David‘s friends said in an interview during AI7, “Music is David’s life.” Music is part of every fiber of his being. It is in his thoughts so much he often sings bits of songs in his conversations. The video clip above (credit to bop2datop11) shows David in everyday conversation, singing whatever song comes into his mind as he is speaking. He is immersed in the music in his mind and it just flows out of him.

I stumbled upon an episode of W5, a Canadian news-magazine program that caught my eye because of its title, “The Musical Brain.” I naturally thought of David.

Interestingly, the program reveals how the brain of a musician is wired differently from that of a non-musician. The artist studied was none other than Sting, who volunteered to be the guinea pig in neuroscientist Daniel Levitan’s study. The scientists discovered that musicians respond poorly to predictability.

Amateur and non-musicians use the right brain for pitch and melody and the left for language. In a master musician, like Sting, the info is shuttled back and forth between the two hemispheres simultaneously.

The scan of Sting’s brain revealed never-before-seen images of the massive fibrous tissue that connects the left and right brain and its ability to shuttle info back and forth. We cannot know how David’s brain works, of course, but I speculate that he is a musician of the most masterful kind.

Music is a universal language, one that we understand before birth — and one that has been used in every culture to express deep emotion, things that cannot be expressed with words.

Whenever David sings, no matter what he sings, I feel it, with everything I have. David has a true musical brain as well as a musical soul, as Sir Andrew Lloyd Weber has pointed out. A combination that is a blessing to us all. — refnaf

P.S. If you’d like to check out the rest of the program, click here.
Not sure if it will work outside of Canada! eh! 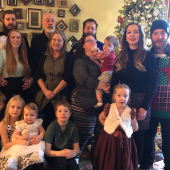