It’s a long day at the office. You’re glancing at the clock and cannot wait for the day to end. And suddenly appearing at your door is David Archuleta, singing a Christmas carol!

That was the fortunate circumstance that befell more than one lucky employee at MTV, when David went caroling around the MTV offices with Jim Cantiello. As for one person in particular, Jeffrey… we all know that David personally singing “O Holy Night” a cappella is enough to make anybody ver clempt, but Jeffrey looked even more meshugenah than the typical person. He must be an Archie—you think?

Jim Cantiello had the pleasure of duetting with the Archster, and judging from his blog, he was similarly smitten:

They don’t come sweeter than David Archuleta. I know Paula Abdul got a lot of flack for saying she wanted to decapitate the boy and dangle his head from her rearview mirror (as a compliment), but after spending time with him this week I know exactly where Paula is coming from. By the end of our hour together, I was looking all over MTV for a hacksaw.

The reason for the caroling, of course, was to highlight the October 13 release of David’s second album, “Christmas from the Heart.” Fans have been clamoring since the beginning that David should release a Christmas album, and now they’ve gotten their wish. Reaction among fans has been rapturous: a remarkable 85 out of 87 people have given five stars out of five as of this writing. 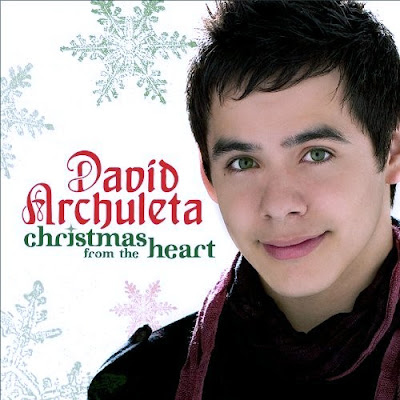 But no report of the response to CFTH is complete without mentioning the infamous Rivallgate incident. When Ann Rivall, an undergraduate at the University of Madison-Wisconsin, published a “ho-ho-horrible” review, fan passion went unhinged. The article racked up 224 comments, ranging from articulate to saying “I HATE YOU! EVERYONE HATES YOU!” It even became a “teachable moment” for one professor’s media studies class. File this under the category “It seemed awful at the time, but in hindsight it was kind of funny.” Heck hath no fury like a fanbase scorned.

Despite having much less media buzz than Bob Dylan’s Christmas album released on the same date, CFTH sold nearly as many units (17,000) as Dylan’s (20,500). These are excellent sales, given how far we still are from the holiday season.

David spent a week in Nashville, the Music City, where he had the chance to focus on writing and recording songs with Joy Williams (writer of Waiting for Yesterday) and other artists. David loved his time in Nashville and posted two video blogs, one while surrounded by pianos target=”_blank”>during a writing session and the other from the target=”_blank”>recording studio.

David opened up to Brian Mansfield in an excellent interview on Idol Chatter, in which David enthused about the Nashville music scene and about being able to write songs that reflected and expressed himself. It’s hard not to read it without feeling some Archuticipation:

Instead of saying, ‘We need to write a hit! Smash! That’s not good enough! It’s not catchy enough!’ they’re like, ‘Let’s just write and see what comes out.’ They really care about what I like and what makes me feel good.

It sure is sounding like the second pop album will be much more a reflection of David than his first pop album, which was produced quickly while touring.

David tweeted about having a “good meeting” with Jeff Fenster, Senior VP of A&R (Artist and Repertoire) for the Zomba Label Group. This interview with Jeff Fenster reveals what a VP of A&R does. Given David’s good feeling about the meeting, this sounds most excellent.

David then flew to New York, where he did his promotional caroling with MTV. In an interview with ABC News Radio, he talked about the holiday season and the new album. Video of the interviews is on YouTube: Part One Part Two.

The dates to David’s Christmas tour were released, but puzzlingly did not include the Southern states. The tour will run from November 24 to December 20, and David buddy Benton Paul will be opening.

ILoveAllAccess.com is selling VIP packages for premium seating and the opportunity to meet David and hear a private pre-concert. The VIPs for Cleveland, Waukegan and Westbury sold out within hours. Fans are organizing meet-ups at this site and elsewhere.

And it looks like David is on a fitness binge, tweeting incessantly about healthy foods and exercising. Perhaps David loves how cardio improves his breathing? Or maybe he wants to train for running quickly from fans. (Cuz I run pretty fast after all.)

Jive, Youth Culture, and the Artistry of David